Killed by Boudica in Rome

Commander of the XIV Legion

Vitallion is a Roman general within the Roman army. He is the Legatus (Commander-General) of the XIV Legion.

Vitallion is a major character in Ryse. As the Legate of the XIV., he has fought alongside Leontius Titus during a previous campaign to Britannia. When he meets Marius, he recruits him to the 14th legion after Marius's father is killed. A seasoned officer with decades of experience, his long history of war has caused him to question the new campaign through his own sense of morality.

He goes on many journeys with Marius and serves as both a mentor and surrogate father figure to him.

After Marius' family is killed, Vitallion takes him into the 14th. He is later seen when he makes Marius a Centurion after he seized the British shore lines. He is then informed by a scout that barbarians had attacked York and that General Commodus and his legion engaged them but their fates were unknown, and so he tells Marius to prepare the men for the march to York.

Next he is seen talking to Marius after a scout informs them of the barbarian army, and he plans to capture King Oswald and his daughter Boudica rather than suffer heavy loses. He later seen meeting up with Marius after Oswald is captured. Once in York he and Marius are a bit unhappy on how the Britons are being treated and gets into a bit of an argument with Basillius (the youngest son of the Emperor) on what to do with King Oswald and Boudica. Basilius forces information from Oswald on what happened to Commodus who has been sold to the horn king, and then he tasks Vitallion and his men to go to the Northenlands past Hadrian's Wall and save Commodus.

In the Northern lands, they are attacked by horned men and Vitallion gets knocked out of action and then is taken by them to be a sacrifice. He is later seen in the head of the Wicker Man (a big wooden statue from which the horned men use for sacrificing). After Marius defeats Chief Glott he frees Vitallion with the ram. He then says (sometimes a man most look past what he thinks he sees.) and congratulates Marius. Then Commodus order them to set him free much to their dismay that he is alive and tries to ignore him but tells Marius to free him anyways.

Later in York he manages to convince Oswald to commit to peace. He then looks in shock when Commodus kills Oswald along with everyone else. After Commodus and his brother flees Vitallion asks Marius to buy him time to evacuate the men and roman citizens. He then tries to stay behind to buy the last ship time but Marius convinces him to leave to talk to the Senate and after they arm shake he leaves.

Vitallion isn't seen again until after Marius (who is now Damocles) kills Commodus in the arena. He explains the situation and the Barbarians' army. With Commodus gone Vitallion is now in command and convinces Marius to fight for Rome before he can kill Nero. They set up defenses in Rome to defend it after the first row of men is shattered Vitallion and some soldiers goes in to defend the lines. He kills several barbarians with ease until Boudica shows up with her war elephant for which he takes a spear and throws it into one of the elephant's eyes knocking Boudica off. Vitallion and Boudica fight which Marius goes in to support but before he can Vitallion is killed by Boudica. 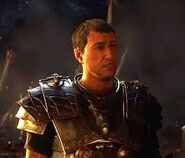 Vitallion gets captured by the horned men

Vitallion charges to battle the barbarians

Vitallion and Marius' goodbye in York
Community content is available under CC-BY-SA unless otherwise noted.
Advertisement